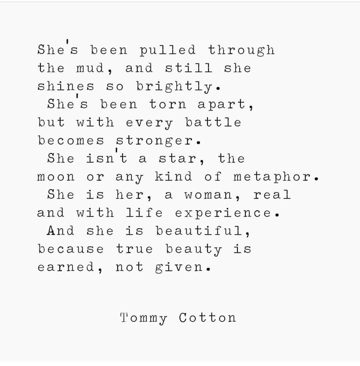 My last week has been fabulous. It is truly amazing how no contact has had such a profound effect on my mental and emotional well being. That one week of seeing the Narcissist a few times to get my stuff back really messed with me… but I am back on track and feeling better than ever.

One of the best parts of the last few weeks is that I feel like I am finally getting myself back. Over the years of being married to the Narcissist I slowly lost all of the tiny threads that made me… me. I became a mirror of the Narcissist… I slowly adapted all of the things that he thought were important and that he liked and appreciated and made them “mine” as well. Only they were never really mine because I couldn’t even have those things in ways that made me happy. It is crazy to look back on now because I can see it so clearly… but the entire time it was happening I really didn’t realize how bad it had become.

When I first started thinking about leaving the Narcissist I was scared, scared that I would never be happy again, scared that my friends and family wouldn’t want me back, scared that I would never be able to find love, scared about all of it. The reality is that no part of this journey has been as scary as I thought it would be. It has all been easier than I expected and right at this very moment, I am happier than I ever was during my 8 years with the Narcissist.

So here are my current baby-step success stories…

I have remembered that I am my own very special person and I am embracing that every single day.

9 thoughts on “Finding myself after narcissistic abuse”